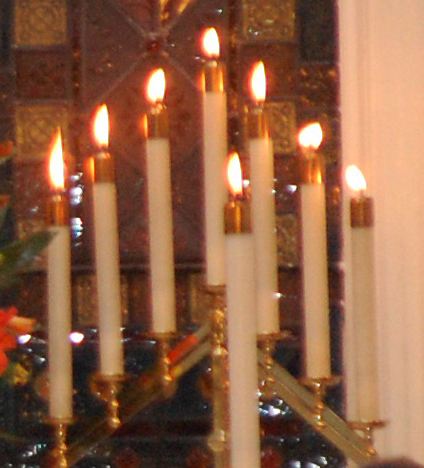 The history of candles and votive lights in Christian worship is somewhat obscure. There has been an argument that states the use of Christian liturgical lights goes back to when the faithful used the catacombs for worship during times of persecution. However, the most commonly held reason for the use of candles and lamps is rooted in the need for illumination at the Vigil Mass at Easter. Originally the use of light for that service was functional, but in time it was seen as a way to celebrate the holy light of the resurrected Son of God.

By the 4th century the use of lights was commonplace during liturgical services. These lights were placed before altars and before shrines dedicated to the saints. Yet, candles were not actually placed on altars as a normative practice until the 12th century, and it was not until the 16th century that the practice became standardized to any degree.

As stated earlier, lights have been used at the shrines of saints and continue to be used to this day to mark the prayers of the faithful as they request saints to make holy prayers of intercession.

Sometimes the illumination of these lights takes on the color that represents the saint being petitioned. For instance, votive candles to the Blessed Virgin Mary are usually in blue glasses, candles for saints who were; martyrs are in red glasses, and candles honoring the presence of the Blessed Sacrament are clear or white, in order to acknowledge the purity of the Lamb of God and our Lord's presence in the sacrament. A large lamp suspended over a tabernacle or aumbry is made of clear glass for that reason. 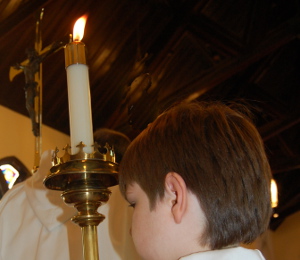 In our liturgical tradition we can find the richness and meaning of worship enhanced when we use all our senses. The use of votive lights and candles provides us all an opportunity to acknowledge that our time in worship and prayer is indeed holy because of the way we are illumined by the light of Christ in liturgy.