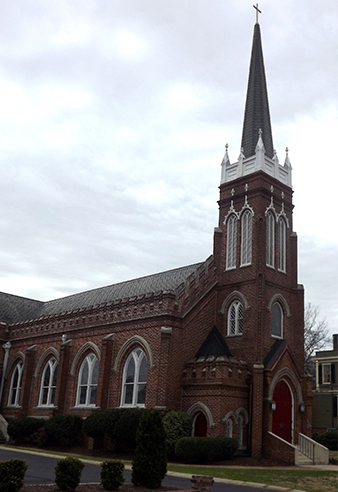 The Church of the Good Shepherd was completed in 1901, to replace the parish’s original building on Barnwell Street. The structure of the building is cruciform, the oldest example of Episcopal architecture in South Carolina. The modified Gothic design is characterized by rows of Gothic windows along the nave; a lofty spire reaches heavenward, and turrets grace the body of the church. Broad steps invite visitors through the large rounded doors into the nave, where the original heart-pine floor leads down a wide center aisle past oak pews to a grand altar crafted of white Italian Cararra marble — the focal and spiritual centerpiece of the church’s rich interior.

The eye drifts upward from the altar to the stained-glass rendering of Christ the Good Shepherd, which was relocated from the original building, and then to the dark open-beam ceiling from which is suspended a life-size wooden crucifix. The lectern, pulpit and altar rail were fashioned from fine gold brass, employing a trinitarian design of grapes and leaves.

In A History of The Church of the Good Shepherd, Agnes Lee Clawson refers to J. Hagood Sams as the architect, a member of the building committee and a parishioner of Good Shepherd. Very little other information about him is extant in the church’s records, so Parish Musician David M. Lowry did some research. His article below focuses on the artist who conceived the design of the building, and brings into play some aspects of his life in Columbia and South Carolina.

The family name Sams was prominent in Beaufort, Colleton, and Charleston Counties in the 19th century. The Reverend Barnwell Bonum Sams (d. 1903) was ordained in 1857 in Beaufort. After serving as assistant rector at Grace Church, Charleston (1857-1863), he set out on an extraordinary career as priest to many small congregations in the Low Country, especially the tide-water area. He is listed as the original Rector of The Church of the Heavenly Rest in Estill, where, thanks to a gift of $1,000 from an anonymous donor from St. Helena’s Parish, Beaufort, he led services in “a neat and churchly building.” Bishop William Bell White Howe consecrated that building in November 1891. In 1895, The Rev’d B.B. Sams became rector of Trinity, Edisto Island, where in 1896 repairs and improvements to the extent of $782 made Trinity “one of the neatest churches in the diocese.” There are accounts of his pride as the owner of a fine boat and his role, in 1890, establishing (re-instituting?) the Rockville Races.

Two of the Rev’d B.B. Sams sons are of particular interest to the Church of the Good Shepherd: James Hagood Sams, born in Beaufort, 1872, and The Rev’d William Bee Sams, born in Barnwell, 1875.

W.B. Sams was ordained by Bishop Ellison Capers in 1901 at Grace Chapel, Rockville, Wadlamaw Island, part of St. John’s, Colleton, John’s Island. He was one of seven clergy present in the first liturgy here at Good Shepherd (see p. 3). The Rev’d W.B. Sams at that time was chaplain for Trinity Chapel in Olympia (later Holy Comforter, Columbia) and went on to serve briefly in Abbeville and Greenville. From 1921 until his retirement in 1946, The Rev’d W.B. Sams was priest-in-charge, simultaneously, of the churches in Mt. Pleasant, Sullivan’s Island, Wando, and Santee. He died in 1952 and is buried in Christ Church Cemetery, Mt. Pleasant.

James Hagood Sams graduated from the Porter Military Academy in Charleston and moved to Columbia in 1895, at age 23, to become a draftsman in the architectural firm of C.C. Wilson. He married Caroline (“Carrie”) Earle November 20, 1900 at the residence of her mother, Mrs. Thompson Earle, at 1703 Laurel Street. The officiating clergymen were his father, the Rev’d B.B. Sams, and the Rev’d W.P. Witsell, Rector of Good Shepherd. In the financial records of the church Mrs. J.H. Sams appears in 1902 and again in 1914 as the church organist.

In 1904 the Samses built their own residence at 1624 Pendleton Street, now the site of the National Advocacy Center. Around 1925 they left their Pendleton Street residence and moved to 1401 Laurel Street (known as the DeBruhl-Marshall house, probably after a design by Robert Mills, built in 1820). J.H. Sams died unexpectedly on February 12, 1935, in that house, while reading the morning paper. The funeral was held in the house next morning. At the time of his death he was a member of Trinity Church whose rector, The Rev’d Henry D. Phillips, conducted the funeral. J.H. Sams is buried in Elmwood Cemetery.

As an architect, Sams brought with him the obvious church-related experiences he was born into in Beaufort County. In 1898 he established his own architectural office at 1423 Main Street and a few months later brought in a Wilson employee, Paul Hammond Youmans (1871-1904) to partner the firm Sams & Youmans. In 1900 Sams and Youmans won the commission to design the Columbia Police Station, which stood next to City Hall and the Opera House at Main and Gervais, later razed for the Wade Hampton Hotel.

Operating alone again in late 1900, Sams won the contract for the Boyne Building, 1736 Main Street, years later to be known to many a South Carolinian as the Elite Epicurean Restaurant, more recently several restaurants. The original tenants were the T. A. Boyne Shoe Store and James M. Green’s Fine Groceries.

Also in 1901 Sams designed the DesPortes Business Buildings on Assembly Street, the present site of the Richland County Public Library. In 1902 came the design for Second Presbyterian at 1107 Laurel Street. Sams teamed with a new partner in 1903, Avery Carter (1863-1920). For the next two years the firm Sams & Carter was very busy with plans for these Columbia sites (among others out of town):

Sams resumed an independent studio in 1905. Numerous banks, schools and hotels were also among his works, including the 1915 McFeat-Bowen Business College at 1801 Hampton Street, and the 1922 DeSoto Hotel at 1108 Lady Street, both now razed.

Among subsequent works by J. H. Sams were several churches including:

At the consecration of Sams’ Zion Church in Eastover on November 26, 1911, Bishop William Alexander Guerry noted that Zion Church was “one of the most churchly and beautiful in the diocese.” Zion church was declared dormant in 1984 and burned on Good Friday 1992. The foundation, front portal and altar arch are preserved. Zion, along with the two extant Columbia church buildings, reflects a very competent interest in Gothic Revival style.

The Church of the Good Shepherd has the distinction of being J.H. Sams’ first church design. The blueprints label Good Shepherd as Job No. 192. His interest in Gothic Revival style is evident in the cruciform floor plan, the pointed arches and exterior details such as the crenelated formations at the roof lines (recalling medieval battlements) and the finials soaring into mannered fleur-de-lis on the tower.

One sees photographs and drawings of Good Shepherd with a spire, which obviously is not there. It was removed in 1996 because decayed wood caused it to lean toward the roof of the nave, threatening the integrity of the entire building. Records do not confirm it was or was not erected in 1901 when the building was new. In the removal of the spire there were indications that it may have been built later. Replacing the spire is not a simple matter, financially or structurally-its replacement remains a very lively discussion as the church enters its second century. In 2004 project, a careful restoration of all the “teeth” in the crenelated formations took place, all the upper brickwork received fresh grout, and the exterior brick walls were waterproofed, preserving the integrity of the exterior for many years to come.

Given that Columbia was a much smaller city during Sams’ lifetime, it is nevertheless worthy of comment that the bulk of his Columbia work was within this “neighborhood,” in a boundary marked from Gervais/Assembly north to Laurel, east to Harden, south to Gervais, including the Waverly community just to the east of Harden. His contributions were medical offices, civic buildings, educational buildings, retail businesses, homes and churches.

Thus only four examples of Sams’ work remain in Columbia in 2004: Good Shepherd and Arsenal Hill churches, and the Boyne and Brown buildings.

Services on Holy Days as Announced